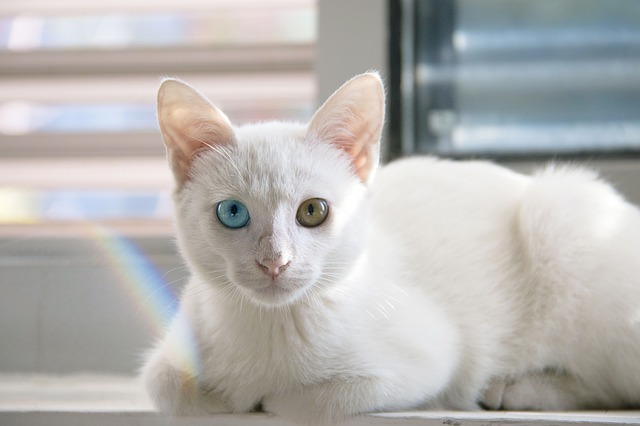 Image by Vistaway from Pixabay

This story was written for the Reedsy contest "Close to Home".
More specifically in the context of the prompt: "Write a story about two neighbors talking from their yards, windows, balconies, etc."

Romeo the dog and Julia the cat

“I wish they’d stop the lock-down here and now,” Julia says.
The white cat is sitting high on a balcony, meowing at the neighbors’ dog Romeo.
“But why?” the black dog asks from his backyard. “I like the lock-down. I’m having the best time of my life.”
“You’re kidding, aren’t you? For years, I’ve managed to tolerate humans,” Julia whines, “but this is just too much. It has to end.”
“But we finally get the attention we deserve now that the humans are grounded!”
“I can assure you: I don’t need that much attention.”
“They walk me multiple times a day; they are always around when I need them. Isn’t that fantastic?”
“I don’t need to be walked,” Julia growls. “I don’t need anything from a human, except for a clean litter box and my daily can of food.”
“But the kids have been home for six weeks in a row now,” Romeo argues. “Surely you must appreciate that. It’s always fun when the kids are around.”
“Don’t get me started on the kids,” Julia hisses.
“What is there not to like about them? They love to play, and there are more leftovers from the table when they are home. I’ve already gained a pound since the start of the lock-down.”
“Do you see how I am dressed? I can’t get out like this, can I?”
“You look like a princess with that nice pink dress and that shiny tiara!” Romeo answers. “That’s the perfect outfit for a night out.”
“I beg to differ,” Julia says. “With Easter, it was even worse. They gave me a bunny suit and bunny ears. I felt so embarrassed! I’m a predator, Romeo, not a bunny rabbit!”
“I must admit,” says Romeo, “that bunny outfit was also confusing for me. I almost chased you thinking you were game. Fortunately, the kids saved you. You see! Kids aren’t all bad!”
“Not bad? They are horrible! They don’t leave me alone for one second. I had to flee to the balcony to escape them. I bet they are looking for me as we speak.”

“Neighbor?”
Francesca appears on the balcony; Julia flees inside, looking for another place to hide, struggling with her long pink dress and ribbons. “Neighbor, can you hear me?” Francesca repeats.
Emma looks up from her book and puts down her headset.
“Oh, hi Francesca!” she says. “What’s up?”
“Didn’t you notice your dog has been barking at our cat for the last half hour?”
“Yeah,” Emma answers. “Romeo's barking was annoying the first couple of days of the lock-down, but one gets used to it. This headset also does wonders. I almost didn’t hear you call me.”
“Well, I’m not used to all that noise yet, and I don’t want to get used to it either.”
“You probably won’t have to. This lock-down isn't going to last forever.”
“I should hope not, but in the meantime, can you do something to keep your dog quiet?”
“I don’t need to, he stopped barking the moment your cat went inside.”
“Ah, Julia,” Francesca sighs. “She’s almost as fed up with the whole situation as we are.”
“Romeo loves it. The more attention he gets, the more attention he wants.”
“That sounds as if you’re talking about my husband.”
“Hahaha, I hear you!”
“Do you have the same problem with John?”
“No, I mean I literally hear you and Eric. You leave your bedroom window open at night.”
Francesca blushes. She wants to reprimand Emma, but Eric who joins her on the balcony before she can think of anything to say.
“Hi neighbor,” Eric says. “Catching some sun, are you?”
“Yes, the weather is ideal for it.”
From the balcony, Eric looks right into Emma’s cleavage.
“Come on, Eric,” Francesca tells her husband. “Let’s go inside, we need to make sure the kids get their schoolwork done.”
“They’re almost done with it. They only need five more minutes.”
“Almost done isn’t done, Eric!”
“I think I’m also going to check on what the kids are doing,” Emma says. “Bye neighbors!”

Five minutes later, Romeo is barking at the neighbors’ kids through an opening in the fence. Francesca and Eric have been giving them chores in the garden the last couple of weeks. One of those chores is to paint the fence white, and as the dog is annoying them, they paint his nose white.
Romeo whimpers and snarls; he runs back to the house looking for someone to comfort him. The kids come out and see what the fuss in the garden is all about.
“Why did you paint our dog’s nose white?” Jessica yells through the fence.
“He was barking at us, Jessica,” Carl answers. He feels sorry already; he has a crush on Jessica who is one year his senior.
“He was annoying us,” Carl’s younger sister Casey adds. “He deserved it.”
“You shouldn’t tease our dog,” Jessica says. “We’ll take revenge!”
“Yes,” says her little brother, Julian. “We’ll do something to Julia!”
“You’ll do no such thing,” says Emma, who has overheard the whole conversation.
“Yes, we will!” Julian yells.
“Hush, Julian,” his sister whispers. “Don’t make mam angry. We’ll find a way to get back at Carl and Casey.”

That evening, Jessica and Julian choose not to watch tv, but to play outside.
“There are some advantages to this lock-down,” John tells his wife. “When is the last time Julian and Jessica played together?”
“I don’t know,” Emma says. “I hope they’re not up to something.”
“Don’t worry. What could happen to them so close to home?”
“Well, that for instance,” says Emma, and she points at Julian and Jessica coming into the living room.
“What happened to you?” John asks his son.
“The neighbors’ cat has scratched me,” the boy says. He doesn’t want to cry, but it’s clear he’s in pain.
“It doesn’t hurt,” he tries to convince his dad. “Jessica already disinfected it.”
“Disinfected?” Emma says. “You looks like someone dropped you in a bath of Mercurochrome. You're all red.”
“What’s so funny about that?” Emma asks when both kids start laughing. Exactly one seconds later, they hear Francesca’s shrieking voice: “What have they done? What have they done?”
“Kids, what have you done?” John asks.

The next day, Romeo can’t stop laughing when Julia appears on her balcony. The night before, Emma and John have scrubbed his nose with soap and water. All traces of white paint are gone. Julia however, is a sight for sour eyes.
“How much Mercurochrome did they use?” Romeo asks.
“More than enough,” Julia moos.
“Look at it from the positive side,” Romeo laughed. “With all that body-painting, you don’t need to be dressed up anymore.”