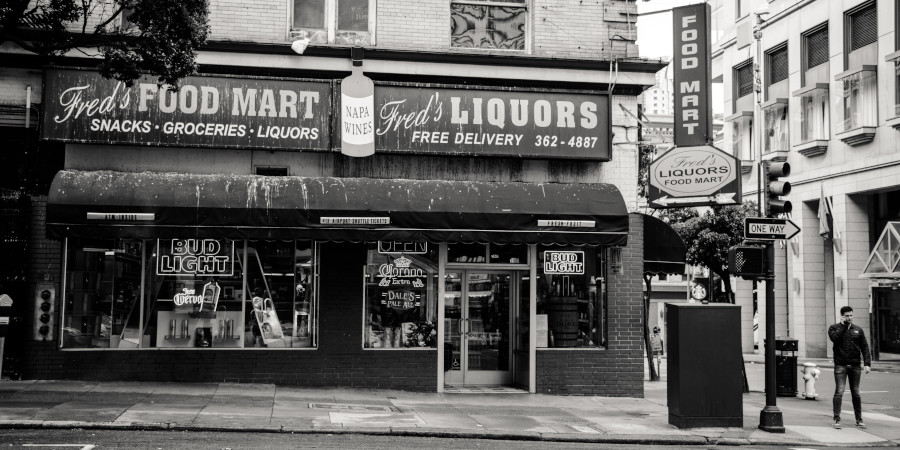 Photo by Brett Sayles from Pexels

This story was written for the Reedsy contest "The Ordinary".
More specifically in the context of the prompt: "Write a short story about someone going to the corner store to buy an everyday item."

Death of a Corner Store

“One Pebble's vitamin, please.”
Just like every other day, Hubert puts five cents on the counter at the corner store.
“I'm sorry, Hubert,” says Jack, the shop owner. “We're all out of them.”
“How is that possible?” Hubert asks. “You know I come here every day to buy my Pebble's vitamin.”
“I know,” Jack says, “and I value you as a customer, but I've told you many times before that one day we would run out of them.”
“That's true,” Hubert replies, “and each time you told me, I urged you to order a new stock.”
“I wish I could,” Jack says, “but Pebble's vitamins were taken off the market an eternity ago. My father bought a lifetime supply right before that happened, just to make sure that he could cater to your needs.”
“A lifetime supply?” Hubert says. “I’m not dead yet! Are you insinuating that I already have one foot in the grave?”
Jack knows it's not a good idea for him to say out loud what he thinks. For as long as he can remember, Hubert has been coming to the store every day, never buying anything more than a Pebble's vitamin for five cents. That price hasn’t changed for over forty years —that's how old Jack is. Jack wants to make Hubert realize how he feels about that awkward situation without hurting his loyal customer's feeling.
“It was more than a lifetime supply for my father,” Jack answers.
Hubert hesitates for a moment. He wants to complain about Jack's negligence to replenish the stock of an item as important as Pebble's vitamins, but then he remembers Jack's father. He has always wondered why the man didn't bother to show up in his own store anymore. Putting two and two together, he understands why Jack took over his old man’s place in the store.
“My condolences,” Hubert says. “I didn't know your father was no longer among us.”
“My father passed away five years ago,” Jack confirms.
“I see, I see,” Hubert says. “He was a good man, your father, very considerate of my special needs and all.”
“He was a great man,” Jack says. “He is still missed every day.”
“Indeed, he is,” says Hubert who only just found out that the man was dead and buried half a decade ago. “Now about my little problem…”
Jack anticipates the question: “I'm afraid I can no longer sell you any Pebble's vitamins. If there's anything else I can help you with?”
That was always Hubert's cue to put on his hat and say: “No, I don't think you can. I'll see you tomorrow.”
Jack sighs as Hubert leaves the store: “We won't have any Pebble's vitamins tomorrow either, Hubert.”

That week, Hubert suffers from various physical discomforts, one more serious than the other. Since he no longer takes his daily vitamin, he feels all the energy drain away from his body.
Never before has he longed so much for the weekend to come, for on Saturday, he'll see his great-grandson. The boy never pays much attention to Hubert when he's visiting with his family. He's always busy playing with a small device he calls a “smart” phone. That phone knows everything there is to know about the world.
The father of the boy, Hubert's grandson once explained that you can order anything you want “on the line”. Even if you want something from China, it can be shipped right to your doorstep in a matter of days. Hubert had laughed at the thought; what would he ever want from China?

“Here it is!” Hubert’s great-grandson says. He reads out loud what he has found on an old news archive: “Pebble’s vitamins were taken off the market after someone sued the company. There were no vitamins in the pills. On the contrary! They contained all kinds of harmful substances that caused cancer and other nasty diseases.”
“That can’t be true,” says Hubert. “I’ve been taking those vitamins all my life. In all this time I have never felt sick for more than a day.”
“Don't worry grandfather,” his grandson laughs. “You shouldn’t believe everything you read on the internet.”
“I’ve found another hit,” the great-grandson yells enthusiastically. “They are still available online on a Chinese e-commerce site. You can order a bottle of two hundred fifty capsules for $11.99.”
Hubert makes a quick calculation in his head.
“That’s less than what I’m paying at the corner shop,” he says. “Jack and his father have been ripping me off for all those years!”
“I told you the internet was amazing,” his grandson says.
“I’m almost starting to believe you,” Hubert growls. “What do I have to do to get a bottle?”
“Do you have a credit card?” his grandson asks.

“You’re a lifesaver!” Hubert tells the delivery guy when his package finally arrives and then slams the door shut in the man’s face. He can’t wait to open the parcel. He barely survived the week. Every day, he had been waiting by the front door to avoid that he would miss the shipment, and every day, he had felt worse.
After a short struggle with the cardboard container, he manages to open the bottle. He already feels better the moment he swallows his first vitamin in two weeks. It’s a weight off his shoulders knowing that he’s safe for the next two hundred fifty days.

A couple of weeks later, Hubert walks into Jack’s store.
“Hi Hubert,” Jack says. “I haven’t seen you in a while. What can I do for you?”
“Oh, I don’t really need anything,” Hubert says. “I was just curious. I saw the ‘Total Clearance Sale’ sign outside. Are you closing the shop?”
“I’m afraid I don’t have any other choice,” Jack answers. “Everyone is buying stuff online nowadays. A local store can’t compete with the internet anymore.”
“I understand,” Hubert says. “As a matter of fact, do you remember the vitamins I used to buy here? I found them on the line too. They were even cheaper than what you were selling them at, you little crook.”
Jack grabbed for the baseball bat he kept under the counter. He squeezed its handle in anger. Fortunately, he quickly regained his calm. Hubert would die a natural death. That is: if you count slow poisoning by fake vitamins as a natural cause.