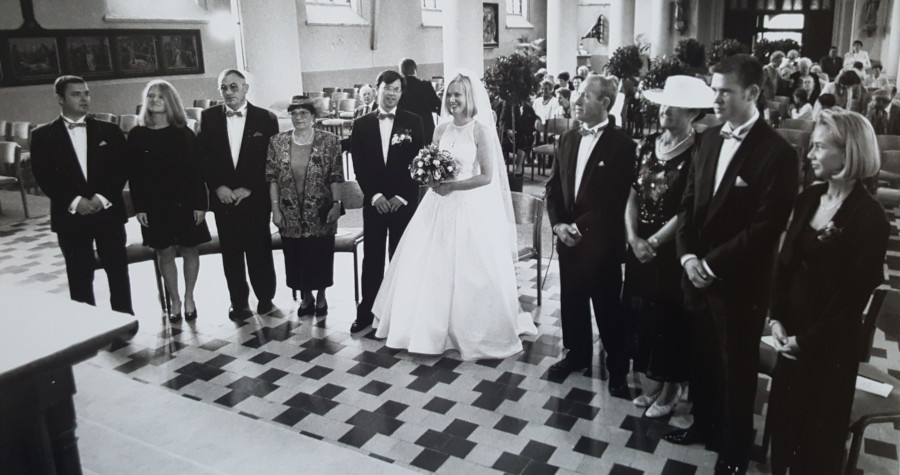 This story was written for the Reedsy contest "Narratively Takeover".
More specifically in the context of the prompt: "Write about your most unique experience at, or in, a wedding."

My mother-in-law has three children: a son, Christiaan (born in 1966), and two daughters, Marjan (1968) and Ingeborg (1970). I met her youngest daughter in college.
The year was 1988; Ingeborg and I were both eighteen years old. We became best friends in our freshman year. We ended up in bed with each other after the opening party of our sophomore year.

In my first year in college, I appreciated Ingeborg as a friend. It didn’t come up in my mind that she could also be my girlfriend. As far as I was concerned, the change in our relationship status at the start of our second year happened purely by accident.
It took me ten days —or rather: ten nights— to gather the courage to tell my future mother-in-law's daughter that I didn't want to engage in a serious relationship. Obviously —and unfortunately—, the end of our short-lived romance also ended our beautiful friendship.
They say that “you don’t miss something until it’s gone”. They are right.
In the weeks that followed, I really missed Ingeborg's friendship. Since we had plenty of classes in common, we couldn’t avoid seeing each other almost every day. This resulted in a suboptimal "on-off" relationship, close to manic depression for the both of us.
That awkward situation went on until we recognized our behavior in the movie “When Harry Met Sally” (1989). From that moment on, we became a romantic couple for real. The first months, we kept our relationship a secret, probably because none of us was convinced it would last, given our bumpy start.
Finally, after watching “Wild at Heart” (1990), featuring Nicolas Cage and Laura Dern in the role of the rock and roll couple “Sailor and Lula”, we told our friends and family that we were “an item”. That news was met with disbelief. We weren't exactly a trivial match, but we didn't care about what people thought of us.
I wore a leather jacket as “a symbol of my individuality and my belief in personal freedom”. Ingeborg asked me to sing “Love me tender” for her, which I refused on account that I would only sing that song for my wife. Our whole world was “wild at heart, and weird on top” in those days.

Much to the surprise of many, including ourselves, our relationship lasted. By the end of 1994, we were looking for a house in Ghent, Belgium. Once we found one, we realized that it would be easier for us to buy it if we were married. On January 7, 1995, we went to City Hall to get married in the presence of our closest relatives: Ingeborg's brother and sister, their spouses, her parents, and my parents —I am an only child.
The civil servant who married us looked at my mother-in-law, and said: “Mrs. Willaert, I see that you have three children. The latest statistics indicate that one in three marriages fails. That would mean that one of your three children will eventually get a divorce.”
Ingeborg and I looked each other in the eyes. We didn’t need words to know what we were thinking: what a strange and disturbing thought to start a marriage with!
My mother-in-law was too baffled to come up with a reply. Moreover, she didn’t consider us to be husband and wife until we took our vows in church, in front of a priest. That was a tad problematic.
Both Ingeborg and I went to Catholic schools, which is the best way to lose one's religion. We tried to explain that we were atheists, but Ingeborg’s mother wouldn't hear of it. She forced us to pay a visit to her cousin, a priest who had wed every couple in the family, including Ingeborg’s siblings.

My mother-in-law couldn't have made a bigger mistake if she thought her cousin would succeed in convincing us to put our signature on a paper, promising to raise our children as good Catholics.
The family priest aggravated the situation, threatening us with doom and gloom: “If you don’t marry in church and you ever get children, the Catholic community will consider those children to be bastards. You also won’t be able to have them baptized.”
This unworldly lecture gave us even more ammunition to oppose a church wedding. You can imagine how much my mother-in-law hated me for this. As far as she was concerned, I was the devil who had made her daughter turn her back on the Church.
In the end, our parents got together. After long deliberation, they offered us a compromise. They would organize a celebration Mass to thank God for the fact that their kids had found each other in marriage, even if we refused to be joined in Holy Matrimony.
The thing with compromises is that you often have to read the wording twice to understand what they imply. In our case, it meant that we would have to show up in church for a celebration that looked like a wedding, but wasn't.
We agreed to the compromise, and a date was picked; September 1, 1995, nine months after what we considered being our official wedding.

My mother-in-law was happy that she could inform her cousin that her daughter was coming to church after all. Her cousin wasn’t pleased when he read the vows we wrote, the poems we wanted to be read in church, and the songs we chose to be played.
He vetoed almost half of the texts we proposed, but we outsmarted him. We used the loophole that arose when he forbade texts to be read out loud, but forgot to mention that it was also forbidden to read them in silence.
The booklet that was handed out had several pages marked “Let us read in silence”; on those pages you would find versus such as:
Lear: But goes thy heart with this?
Cordelia: Ay, good my lord.
Lear: So young and so untender?
Cordelia: So young, my lord, and true.
In this scene, taken from Shakespeare's “King Lear”, Cordelia tells her father that doesn't want to be a hypocrite like her two older siblings. Much to the displeasure of the priest, we deemed these verses to be quite appropriate for the occasion.
The priest took revenge in his sermon. He talked about how a brilliant is a gemstone that is cut to perfection, every facet having the ideal proportions.
“Being like a brilliant is what a true believer strives to be,” he explained to his parishioners and our guests.
He then pointed at us: “But these two people aren’t there yet. They are like diamonds in the rough. They still need a lot of polishing.”
Although we knew it was meant as an insult, we welcomed the name “diamonds in the rough” as our new honorary title. It became a name we chose to wear as a badge of honor.

Our fake Catholic wedding was an awkward experience. Some people were shocked and confused as if they had just witnessed a thriller at the altar.
“What was that all about?” they asked. “What did you two do to make that priest so angry with you?”
Most people however, congratulated us, as if what had just happened was nothing but an ordinary wedding to them. I bet some of them didn’t even notice the difference with a normal church wedding.
That was exactly what my mother-in-law had hoped for: the shame of her daughter living with a man without having been in church was gone.

Today, we're in the year 2020. Ingeborg and I are —or will be— married for twenty-five years —depending on which date you prefer to take into account.
Personally, we would have celebrated our wedding anniversary on the seventh of January, but as only the first of September counts for my mother-in-law, we made yet another compromise: we’ll organize a party in May, which is in between both wedding dates.
The relationship with my mother-in-law has improved significantly over the years, but I have yet to sing “Love Me Tender” to my wife.

You may wonder what happened with the statistics presented to us by the civil servant on our first wedding date. As it turns out, the marriage statistics got worse. Nowadays, almost two out of three marriages end in divorce.
As you've noticed, my wife and I are still happily married, albeit still not in Holy Matrimony. The statistics were honored by her brother and sister. They divorced the spouse they married with in church. They are now in their second marriage, living in sin, just like their sister and I.
So it goes…